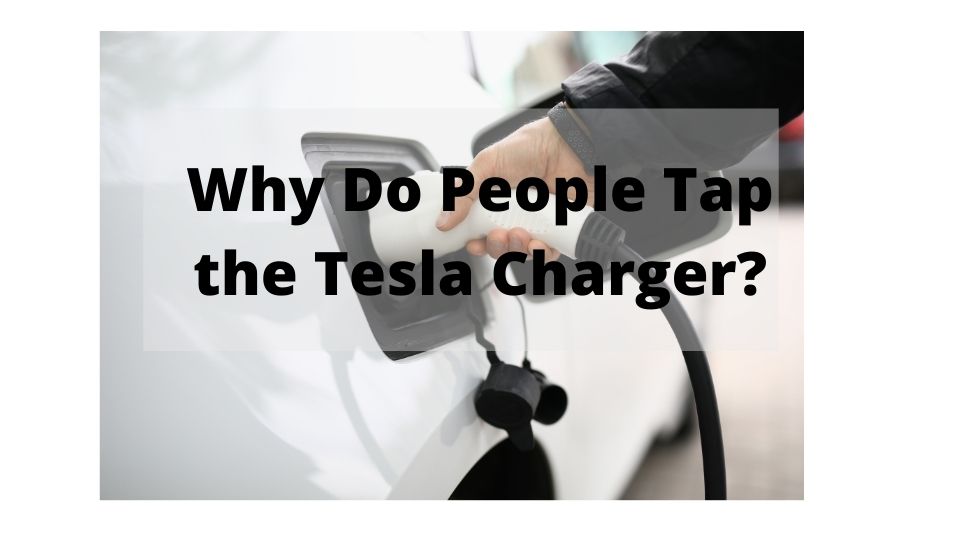 You may have seen it in person or on the internet but there is a strange thing that Tesla drivers do before charging their cars.

They tap their car at least once but usually several times before proceeding to charge. Why exactly do they do that though? Is this a cult thing like the Jeep wave or is there something deeper to it?

Well, in this post we are going to be revealing the reasons why just about every Tesla driver taps their car before charging.

In short, People Tap the Tesla Charger in order to To activate the charger, open the charger port door, Remove debris from the charger hole, Force of habit, or for Social Media.

Let’s look a little deeper into these points one by one.

Why Do People Tap the Tesla Charger

Tapping the Tesla Charger to Activate the Charger

This will not happen with all chargers but there are several scenarios where the charger will not activate after inserting it. To fix this problem, you tap your charger nozzle several times on the back of your car.

When you re-insert it, it should then begin charging. It’s not clear whether this is by design on Tesla’s part or it’s a design flaw that if fixed by tapping the charger several times. Some Tesla drivers have never had to do this.

The second reason that Tesla drivers tap their cars before charging is that this is one of several ways of opening the charging port especially if you are at a non-Tesla charging port.

When you use a Tesla charger, you have the option of pressing a button on the charging nozzle that opens your charger port door. However, non-Tesla charging stations will not have this capability.

In such instances, you will need to tap your car several times around the tail light area in order to open up the charging door.

To Remove Debris from Charger Hole

This is quite common in outdoor charging terminals where they are exposed to the elements and many users. Ultimately, you are bound to have this kind of situation where debris collects in the charger.

The last place you want it collecting is in your charging port.

Tapping With Key FOB or Phone

You can open the port from the dash, through the mobile app as well as your Key FOB. If you forget to open the door from the dash, you can either use a key FOB or phone. You can tap either of them on the charger pot door and it will open up.

Tapping Your Tesla Just as a Habit

We’ve looked at the various practical reasons why Tesla owners tap their cars. While all of them have actual reasons why they are done, sometimes it just becomes a force of habit or a tradition that eventually becomes a thing among Tesla drivers.

As we have already seen from this article, there are several reasons (some valid and some not so valid) why people tap their Teslas. We’ve put this one last because it falls under the not valid category.

Tapping your Tesla before charging it actually became a viral TikTok sensation at some point. When this happened, other Tesla drivers just got in on the action all due to a social media challenge.

It’s crazy what goes vial online these days and is probably a show of just how people can jump onto a bandwagon without really seeking to understand the reason behind it.

Maybe it was time for Tesla owners to have their own “thing” like what you have with the Jeep Wave. If you don’t know what that is, Jeep drivers have a long-standing tradition of waving to each other whenever they happen to cross paths on the road.

So, there you have it. If you didn’t know the reasons why Tesla drivers tap their cars several times before charging, we are sure that you are now fully aware. We hope this article has been helpful to you.