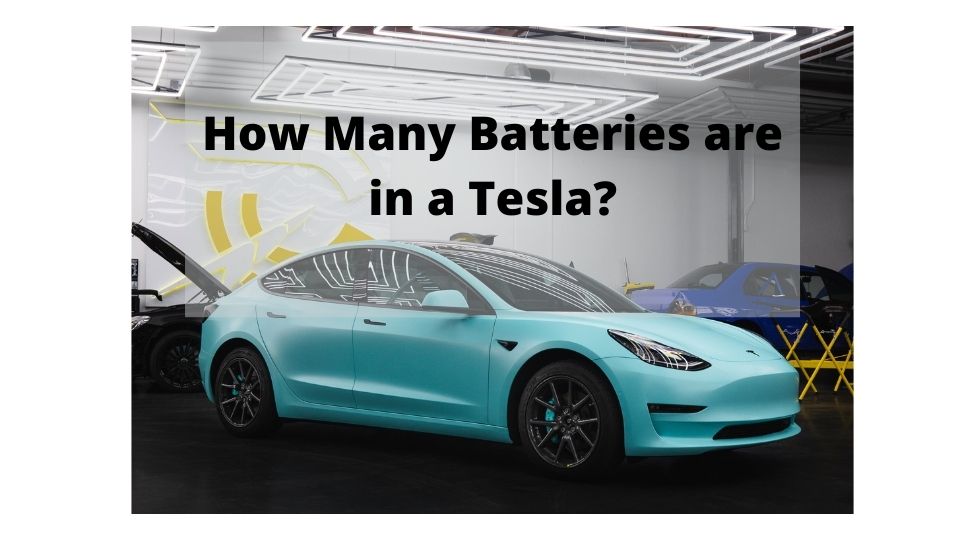 There are over 10 million electric cars on our roads today- more than 50% of these are battery-powered electric cars.

There are plans to partially eliminate combustion engines from our roads- it’s something about efficiency and environmental conservation. Tesla has been at the forefront of this transition from diesel and petrol to electric energy.

The brand is the most popular-owing greatly to its CEO’s social influence. The fact that the car relies solely on battery power has raised numerous questions about its effectiveness.

Most people wonder how many batteries these smart cars pack. In the real sense, Tesla cars run on two batteries.

There is a high voltage battery that handles the car’s mobility and another less powerful one responsible for basic electronic car functions like in any other car battery.

The high voltage battery is divided into multiple cylindrical cells which can be as many as 7000- it all depends on the size of the battery. It is in these small cells that the battery packs power and the more cells a battery has the more power you can expect from it.

How Many Batteries are in a Tesla?

In short, Since 2013, Tesla cars have run on 18650 cells-the S and X models. These batteries are manufactured in Asia by long-time battery manufacturer Panasonic.

Tesla’s choice to build their batteries as small cells packed together to create a larger battery has led to many wondering about the number of batteries built into the various Tesla models.

To bust any myths out there, the Tesla runs on only one battery that is made up of multiple cells. The number of cells depends on the battery size.

A normal 60 kWh battery runs on 6216 tiny cells. The Tesla battery packs with 18650 cells can charge in less than 40 minutes although this depends on consumption rates and other factors.

The charge speed might seem slow but it’s the fastest you can expect from a battery pack. The 18650 cell battery can hold down up to 85kWh of power.

There have been improvements on the 18650 battery, it now packs around 8256 cells and delivers slightly more power-around 100kWh. With this amount of energy, the battery can handle up to 300 miles.

What Batteries Does Tesla Use?

This depends on the type of car. In long-range vehicles, they employ a combination of nickel-cobalt-aluminum batteries. For standard range car models, you can expect lithium-iron-phosphate combinations-this works better.

Why Does Tesla Use Tiny cylindrical Cells In Their Batteries?

Well, when Tesla decided to go all green, their most convenient option at the time was the consumer form factor cell. The most common of these cells were the 18650 cells.

These cells were both available and affordable to them and their target market. They could not mass manufacture car batteries like other electric vehicle makers so they had to settle with what the market offered.

The idea seemed odd at the time but with time, their vision became clear. The tiny cells packed in the bigger batteries left spaces between them which were very convenient for cooling.

As they unveil new models, they sometimes re-engineer the battery structure to feature larger cells but the basic configuration is retained. These Are The Main Reasons Why Tesla Still Uses The Tiny Cylindrical Battery Cells:

Scaling up a battery comes with an increased volume to surface ratio, this will negate effective cooling. With the distance between the middle of the battery and the cooling surface increased, the battery will take longer to cool.

Packing the small cell together will not be fully efficient either; the cells need to have spaces between them to reduce the amount of heat they pass to each other. This means the cells have to be small and cylindrical for the concept to work.

Few cells generate low voltage and pretty high currents. Heat losses are proportional to the square of the current so arranging more cells in a parallel form will help attain higher voltage while keeping the current moderate.

The 18650 and 21700 battery cells are readily available even in high-performance versions.

What Is A Tesla Battery’s LifeSpan?

According to reports, Tesla batteries are still 90% efficient even after hitting the 200,000 miles mark.

It would take an average driver around 15 years to drive that long and because most car owners dispose of them after 13 years, there are minimal chances the battery will go bad in your hands.

A point worth noting however is that battery life is determined by a myriad of factors which include driving speed and weather. Drivers who drive fast or don’t mind the snow will damage their batteries faster than others.

Tesla Plans to To Build A Million Mile Battery

Tesla’s CEO recently disclosed that Tesla is working on a battery with the capability to power its cars for up to a million miles.

This battery is still in its development stage but the excitement among electric car enthusiasts is evident. Tesla put a team on this project around four years ago.

A research paper published by some acclaimed scientists proved the possibility of the million-mile battery coming to be. The research showed the charged cycles heightened from 1000 to 4000 while employing a unique blend of cathode and electrolyte materials.

Tesla funded this research-perhaps to back its claim. Tesla claims the battery will be affordable and reliable-it will hit the Chinese market first.

Tesla worked in conjunction with Chinese battery maker Amperex Technology Co. Ltd-CALT. In 2020, CALT released a statement saying it was in the process of developing a battery that could last up to 16 years-this is around 1.2 million miles of driving.

It is still not clear whether Tesla can deliver the million-mile battery but with the recent developments we might be going all green sooner than we think.

You can say two Tesla cars use two batteries- the main one and another that runs minor electronic functions like in any other car. Our focus is on the main battery which propels the car.

The number of batteries in a Tesla depends on the size of the battery pack. A Tesla’s battery is made up of numerous small cylindrical cells that work jointly to run the car.

Bigger batteries have more cells than smaller ones. Tesla is developing lighter and more efficient batteries.