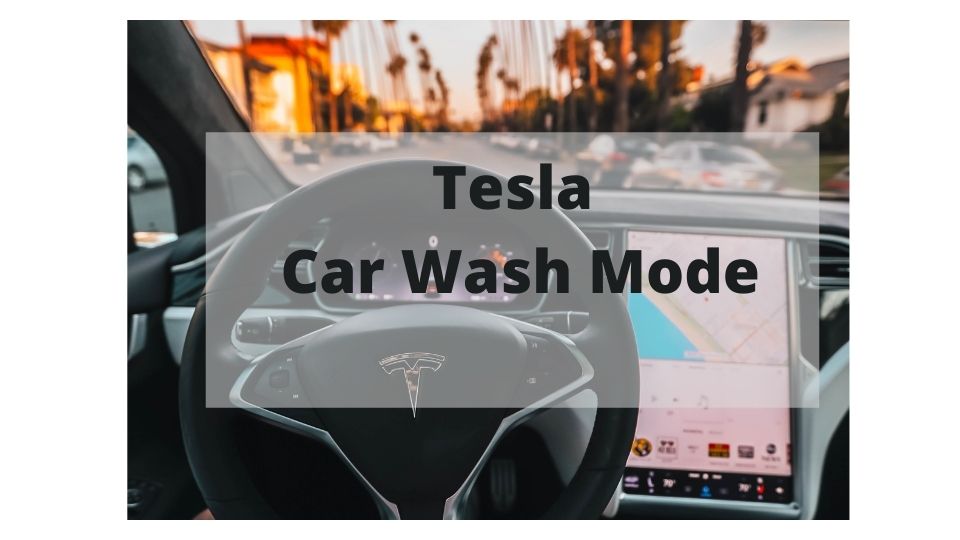 In this post, we are going to be talking about Tesla’s car wash mode. If you are wondering what it is or how to activate it, then you are in the right place. We will be looking into this topic so that you get a better understanding of it.

The Tesla line of vehicles has pushed the motor industry at least a few decades ahead as far as the electric vehicle is concerned. Prior to Tesla, the EV was something people thought of from a futuristic perspective instead of the here and now.

There was a lot that still needed to be improved before EVs could become mainstream. This meant that the cost of producing an EV that could raise a candle against the gasoline-powered engines was very high and too expensive for the ordinary consumer.

Simply put, Tesla has managed to break a lot of barriers and is now a part of everyday life for people all around the world. For all their sophistication, one of the problems faced by owners was when they took their vehicles to an automated car wash.

In short, Tesla car wash mode is a feature that can be activated when taking your Tesla to the car wash, when activated your Tesla will automatically raise the windows, lock the charging port, deactivate windshield wipers, pull in the rear-view wipers, and also lock the trunk and frunk.

Can you put a Tesla through a car wash?

In older Tesla models that did not yet have car wash mode, you faced several issues. The first one you would encounter was in trying to put the vehicle in neutral.

This is a requirement for when the vehicle has to go on the car wash conveyor belt. In order to avoid the wheels being dragged along in park or drive mode, there was a need to put the vehicle in neutral so that the wheels rolled freely.

Tesla only has two shift options which are drive and reverse. Most Tesla owners would be forgiven for thinking that their vehicles do have neutral gear. They hardly use it, if ever. This has definitely caused a problem or two for Tesla owners fidgeting about when it’s their turn to get into the car wash.

To switch to neutral, simply hold your shifter upwards past the drive option and it will switch to neutral. Another problem Tesla drivers faced was with the windshield and charging port sensors.

If the windshield wipers were set to auto, they would be activated during the car wash process leading to damage to the wipers. When high-pressure water or the spinning rollers hit the touch-activated charging port cap, it would open by itself during the washing process.

The fortunate thing is that the design of the charging port prevents from water getting in. However, the port cover could get damaged in the process. Another area of concern is the rearview mirrors that could potentially get damaged while the car was being cleaned.

What is Tesla Car Wash Mode?

To deal with all the above issues, Tesla came up with a car wash mode. With this option activated the vehicle would automatically raise the windows, lock the charging port, deactivate windshield wipers, pull in the rear-view wipers and also lock the trunk and frunk.

This option helped solve most of the issues mentioned above but the system also brought its own set of problems. The main issue is that engaging in car wash mode tends to be a bit of a stretch when you consider all things. For starters, engaging car wash mode is not a seamless process. We will be looking into the steps next.

How to put a Tesla in Car wash Mode?

Here are the steps involved if you want to activate Tesla’s wash mode. First, you need to make sure that your vehicle is in park. From your dash panel, activate wash mode. A screen will pop up showing all the functions that have been affected.

The rearview mirror folding is an optional function that you can choose to activate or leave as is. Once in car wash mode, you can move the car forward onto the conveyor belt system on the car wash.

Once you are done with the car wash, there is no need to take the car out of car wash mode. It will be deactivated as soon your Tesla goes over 10 miles per hour.