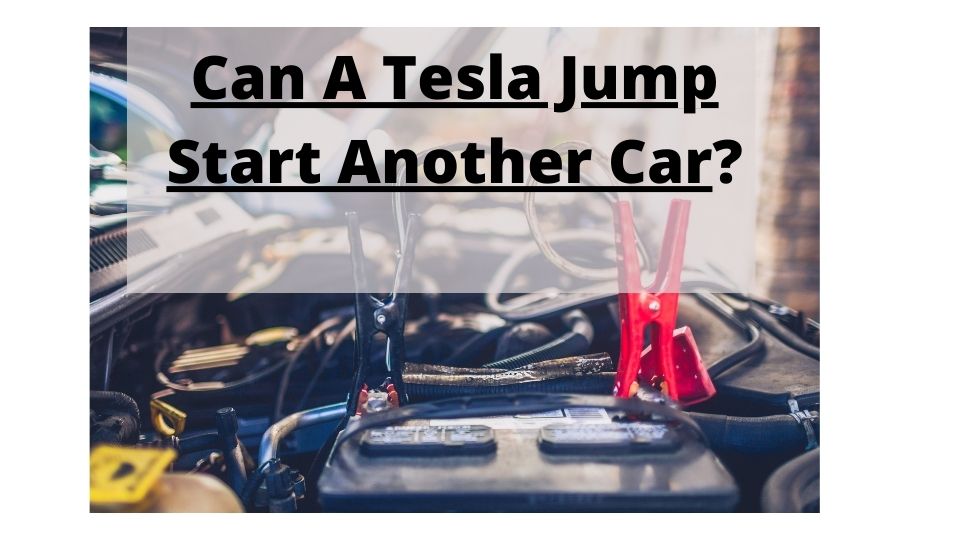 Wondering if you can jump a car with a Tesla? If so, this is for you. Just clarifying that we are not jumping a car over a hill like on Alex Chui’s YouTube channel where an overzealous Tesla owner ended up causing considerable damage.

In this post, I am talking about jump-starting a car using a Tesla. If this is you, then let’s get into it. We all know that Tesla is powered by a large battery pack that generates well over 350 to 370 volts.

This is way too high to jump-start your car as you will most likely damage the battery as well as fry other essential components in your car.

If it was indeed possible to do, you would most likely have to remove a lot of barriers to overcome to just reach the battery terminals.

Unless you own a Tesla, you will probably not know that Teslas have a smaller 12v battery that powers the onboard electronics which require lower voltage. You definitely can use this to jump-start another car but there are possible issues with this approach which we will discuss later in this post.

Does Tesla Have Parts to Jump Start a Normal Vehicle?

I’ve touched on this a little bit in the passages above so now we want to talk about how you can actually ump start another vehicle using a Tesla.

Teslas have motors instead of an engine like convention combustion engines. The motors are placed on the bottom of the vehicle closer to the wheels.

This means that you will have extra storage space where the engine in a car is supposed to be. This section is called the frunk.

If you want to access the 12V battery, you need to open the frunk and remove the protective grill that is just under the front windshield.

Under that compartment is where you will find the 12V battery terminals. You can connect your jump cables to these ports and jump-start your vehicle.

What Voltage are Tesla Batteries

The large Tesla batteries that power the motors will produce anywhere from 350 to 370 volts. This battery is specifically dedicated to the motors and no other part of the vehicle.

What it means is that the other components of the vehicle such as the onboard computer need an alternative power source. That’s where the 12V battery comes in.

That battery is dedicated to the onboard system. To keep the sensitive components including fuses safe, you need to eliminate the risk of things like power surges that are possible in situations where high voltages are involved.

The Downside of Jump Starting With a Tesla

Like any other car, there are some risks involved when it comes to using your Tesla to jump start another vehicle. Here’s what you need to know before you try it:

Conclusion on Can A Tesla Jump Start Another Car

So, there you have it. Jump starting another vehicle with a Tesla is possible. There are, however, some associated risks when it comes to doing this. The last thing you want is to have your Tesla shut down on you and refuse to start because a large current has been drawn from your Tesla battery.