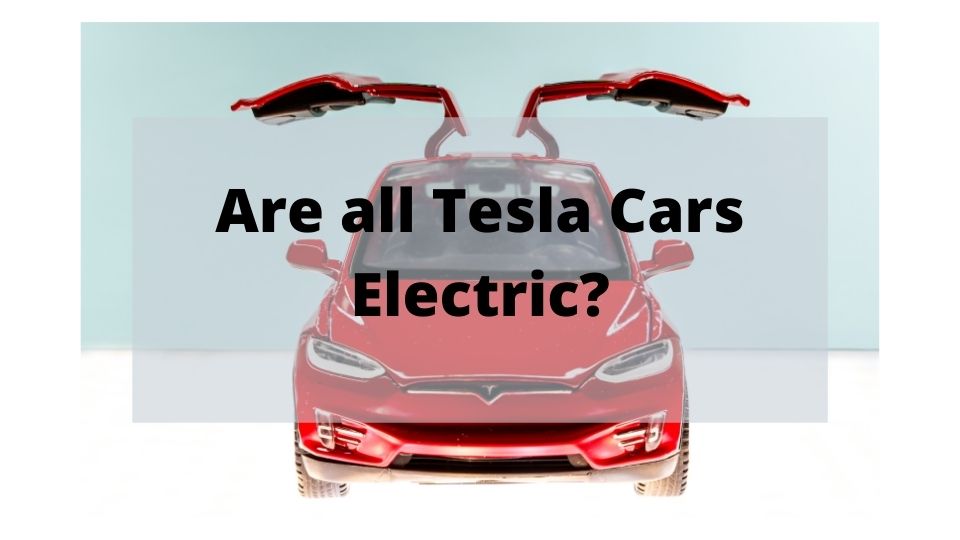 Think electric cars are boring? Think again! When Elon Musk initially announced the Tesla vehicle, he caused a stir of excitement in the worlds of technology and innovation. This was amplified further when he stated that Tesla would not use any gasoline motors in their next car.

Tesla Motors has expanded far beyond its origins in electric cars. The company’s goal of producing an affordable all-electric car has been achieved numerous times over, but Tesla is still acting on its vision of reducing carbon emissions through the use of electric vehicles.

The company recently announced its factory will host the world’s largest lithium-ion battery installation capable of storing massive amounts of energy to help power homes and businesses at night.

In this article, though I am going to provide an answer to the question “Are all Tesla Cars Electric?” so read on!

Are all Tesla Cars Electric?

In short, Yes, all Tesla cars are fully electric. Tesla has actually been in the electric car game since 2008 when it introduced the Roadster and has never produced a gas-powered car.

The Model 3 is the most affordable option, but it only comes with a standard range battery pack, which results in a range of around 220 miles but can be upgraded to long-range all-wheel drive which has a range of 313 miles.

In addition to its passenger vehicles, Tesla also produces fully-electric semi-trucks and the Roadster sports car.

At the moment Tesla is committed to making only electric cars and doesn’t make internal combustion engine cars that rely on gas.

All Tesla vehicles are fully electric, unlike the internal combustion engines, Tesla doesn’t need gas to operate. As such you won’t see a tesla pulling up at your local filling station, their supercharging network provides a fast and convenient way for owners to charge their cars over long distances.

How are Tesla Vehicles Powered?

Lithium-ion cells, which power the vehicle, are arranged into groups called modules. Each module contains 6 groups of 74 cells each for a total of 456 cells per module.

The modules are housed within a structural battery pack, which is located below the cabin and between the front and rear axles. The battery pack provides structural strength to support the vehicle while providing a low center of gravity for improved handling characteristics.

The battery pack is made up of thousands of smaller batteries. Each battery is called a cell. The cells are made up of two electrodes, which are separated by a barrier, known as a separator.

The Tesla Model 3 is a compact sedan that’s the entry-level model for the electric car company.

First introduced in 2017, the Model 3 is a smaller alternative to the company’s flagship Model S sedan. With its starting price of $36,200 (before the $7,500 federal tax credit), the Model 3 is also the most affordable Tesla you can buy.

Tesla Model S is a premium sedan and the flagship model of the Tesla lineup. First introduced in 2012, it’s an all-electric vehicle powered by a  99 kWh battery pack and two electric motors (one on each axle).

The Model S is available in several different configurations, depending on range and performance. The 75D is the base model, offering 259 miles of range. This can be upgraded to the 100D, which offers 393 miles of range from its larger battery pack.

Tesla Model X is a mid-size all-electric luxury SUV made by Tesla Inc. The vehicle is unique in the concept that it uses gull-wing doors instead of traditional automotive doors. The prototype was unveiled at Tesla’s design studios in Los Angeles on February 9, 2012 It is the third vehicle built on the Tesla platform, and follows the Tesla Roadster and Model S.

The Model X was developed from the full-sized sedan platform of the Tesla Model S; both are being produced at the Tesla Factory in Fremont, California. The first deliveries of the Model X began in September 2015. Global sales passed 10,000 units in August 2016, and 50,000 in January 2018.

The Tesla Model Y is a mid-size all-electric luxury SUV made by Tesla, Inc. that uses the same platform as the Model 3.

The Model Y was unveiled on March 14, 2019, and is set to start production in late 2020. It has two rows of seats as standard but an optional third row will be available, increasing seating capacity to seven.

Model Y has a standard range of 330 miles and good acceleration too, can go from 0-60 in just 3.2 Seconds