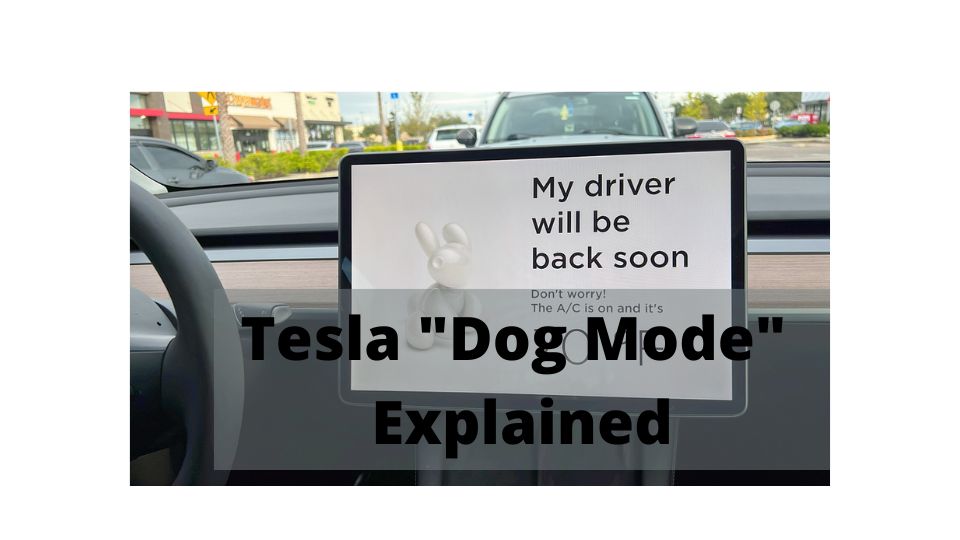 Those looking to buy a Tesla will often ask what is Tesla Dog Mode? There are many instances in which an owner is traveling with their dog but they have to stop and get something from the store. Since they cannot take the pet inside, they have to leave it in the car.

Tesla’s Dog Mode simply keeps the climate control system on to cool or heat the car when you leave your pet in it. It also leaves a helpful message for those passing by to let them know everything’s under control.

The following tells you more about it:

It is a fact that hundreds of pets (mostly dogs) die annually; all from being left in a hot car while their owners are shopping. To fix this, Tesla offers a Dog Mode, which essentially keeps the car’s climate control on in case there’s a pet inside.

The result is that the pet gets proper cooling inside the car, no matter how hot it is outside it. During this time, the owner can shop without any worries, while their furry friend is safe inside their Tesla. This mode came about when a concerned user asked Tesla CEO Elon Musk for it directly on Twitter.

But it isn’t just cooling that is provided by the Dog Mode. If it is too cold outside, you can also turn the mode to a heating setting to keep your pet warm. Like the cooling setting, you can set it to the temperature that you think is appropriate.

If you spot a pet alone in a Tesla, you won’t have to worry as you’ll know that its owner left it on Dog Mode. The mode also displays a message saying: “My owner will be back soon” and “Don’t worry! The heater/ac is on and it’s [Temperature Reading]”. This should be enough to comfort any passerby.

It was also reported this year by Car and Driver, that Ford is also planning on launching a similar mode. This should have more stuff such as relaxing music or sounds for pets when they’re left inside.

How do you use Tesla Dog Mode?

Using this mode is rather simple as operating your climate control system. Just go to your Fan settings to access climate control and then select Dog. You can set the temperature as well, according to your needs. The screen should change and the aforementioned message should display for any passersby.

What temperature is Dog Mode?

It all depends on your choice of temperature, which also loosely depends on the type of dog that you have. Dog Mode prevents your Tesla’s cabin from going over or under the temperature that you have set. It does this using some software and a bunch of sensors.

How much battery does Dog Mode take?

Well, Tesla Dog Mode utilizes your vehicle’s battery and it depletes it at a rate of 4 miles of range per hour. So, you don’t to worry about your battery dying since you’re most likely going to take a couple of minutes off for errands anyway.

It should be noted that you can only turn on Dog Mode when the car’s battery is above the 20% mark. Let’s say that it is and you turn on the mode. If the battery drops to the 20% mark, the mode won’t turn off. But you will get a notification on your phone, asking you to return to the vehicle.

How long can you leave Dog Mode on A Tesla?

The simple answer for this is that Dog Mode will stay as long as there’s juice in your Tesla’s battery. This is why you should be concerned if the battery gets to 20% and you receive the alert for it. However, you should still be cautious even if you have a full battery.

This is because your car’s climate control could possibly go bad – it is rare but it is a possibility. It is hence always suggested to keep a timer with you so that you return to the vehicle as soon as possible. Try not to leave the mode on for more than 10 minutes.

Yes, Tesla’s Dog Mode is perfectly legal. In fact, if you’re worried about legality, you should know that there are some states with laws that punish owners for neglecting and leaving their pets inside the car. In some states, passersby are also allowed to break the car’s window in order to save the pet.

What is the difference between Dog Mode and Camp Mode?

Another mode similar to the Dog Mode is Tesla’s very own Camp Mode. This mode also allows the climate control to function in the car and the cabin to have proper adjustable ventilation. The lights in the cabin will also keep working and music can also be played. In contrast, Dog Mode only allows you to set the temperature inside the car for your pet.