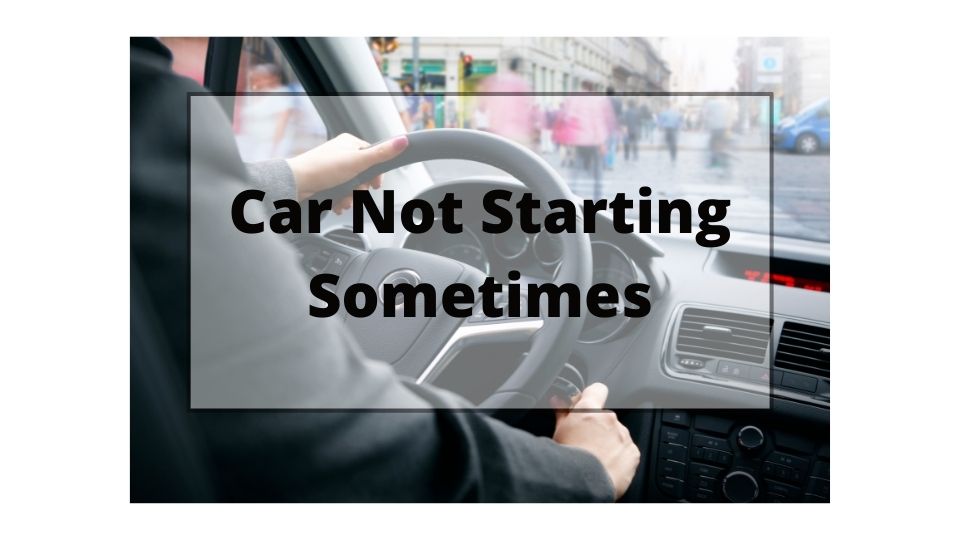 A car starting sometimes is one of the most common problems vehicle owners face at some point, there are a vast number of problems that could lead to a car that occasionally won’t start, but among them are a few main causes. In this article, we will discuss a few of them and go over some tips on how to solve them.

The problem is quite simple, your car will occur sometimes to start at least not all the time, there are many ways in which it could happen, but in most cases, they all derive from bad batteries that are unable to provide sufficient current, power, and connection with the starter motor inside the engine. Let’s jump straight to it

In short, when your car won’t start, the first thing you should do is check your battery, clean or replace it as needed and then move on to the air filter, fuel pump, and ignition switch. once they are fixed you can work on the starter motor if you have any problems with it.

the first thing that comes to mind is the battery when a car won’t start and you’ve already checked the connections, spark plugs, and almost everything else.

The first thing you should do is check the battery for any short circuit or corrosion inside that could be holding it back from being able to store energy. you can use a voltmeter to check if it holds charge properly at least 12v within its terminals.

if your car won’t start even though your battery is fine and has power, then chances are you have a clogged air filter. you need to make sure that air passes through it at least once a month in order for it to be effective. more on this later.

If the starter motor inside the engine is failing to produce enough power to get the engine started. a bad starter motor can happen for a variety of reasons, among them are a corroded or blocked wire, heat damage, or overheating,

but in most cases, it’s the combination of all three that causes starter motors to fail. when the stater is bad the most common symptom is the engine not turning over.

If you have a good battery and it still refuses to start, then there is a bigger problem down in the crankcase, this is when you should check the fuel pump. A fuel pump is responsible for getting the fuel from the fuel tank to the carburetor or a fuel injector. when the pump fails it makes it hard for the engine to start.

when the ignition switch fails you will experience some symptoms such as turning over the engine, but it won’t start, this is because the car thinks you haven’t pressed on the key enough to engage it in contact with the starter motor. when this happens you may have bad electronics inside or a corroded or broken part of the ignition key not rolling smoothly into place.

How to fix a car that sometimes won’t start

the problem with many cars is their batteries, they need regular charging in order to keep them healthy and not corrode, but most people tend to forget that and then experience problems when they need a jump start or their car won’t start at all.

in order to fix a bad battery, all you need to do is make sure it has a sufficient charge and then check the connections inside it and clean them if necessary. in case your battery is really bad, then you should replace it with a brand new one.

a dirty or clogged air filter greatly reduces the car’s ability to get enough air through it, so that an otherwise perfect engine could not perform properly because of it. to keep your air filter clean you should replace it as often as possible, whenever it begins to turn black or you see any signs of build-up or oil inside.

This is a relatively simple problem to solve, all you need to do is remove the starter and check for burned wires, broken or corroded parts, and/or any damage that will prevent the starter from working properly.

When the fuel pump fails you can notice some symptoms such as turning over the engine but it won’t start, this is because the car thinks you haven’t pressed on the key enough to engage it in contact with the starter motor.

When this happens you may have bad electronics inside or a corroded or broken part of the ignition key not rolling smoothly into place.  If this is the main problem then replacing it should do the job.

If your vehicle not starting is caused by a bad ignition switch then you can have it repaired or replaced by your nearest mechanic and that should help the vehicle start anytime.

you no longer have to feel frustrated when your car won’t start, you can now get rid of this problem and get your vehicle running again without having to worry. Follow the tips I’ve given you to prevent issues like these from occurring again and you will be able to do it yourself in no time!

1 thought on “My Car Starts Sometimes and Sometimes it Doesn’t [Solved!]”