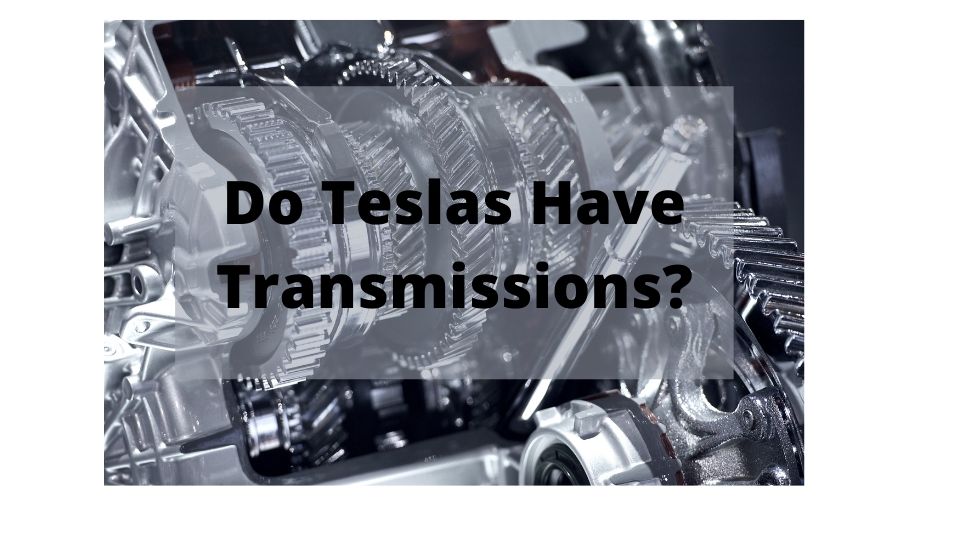 You might be looking to buy your first electric vehicle but the misinformation and uncertainty about Tesla can be dragging your decision-making. Tesla cars are among the pioneer in the electric vehicle world with lots of questions from the public. So, do Teslas have transmissions?

In short, Tesla vehicles have a single-speed automatic transmission that transforms the motor spins into a usable motion on the wheels by giving the car all the necessary power for excellent acceleration.

Having answered this frequently asked question about Tesla, let us now dive deeper into the electric vehicle transmission for more insights. We’ll explore the role of Tesla transmission and how it works.

What Is a Transmission?

Transmission refers to the entire drivetrain that translates the power from the engine into a usable motion on the wheels. A car transmission can either be automatic or manual depending on its make and model.

An automatic transmission usually picks the right gear speed and acceleration while driving. But in manual transmission, the drivers will have to choose the gear that suits their driving speed and style.

A transmission is under the hood in a variety of vehicles. The location enables the driver to control the entire drivetrain without hindering the engine’s functions.

An automobile without a transmission will be difficult to start and stop. But the emergence of electric vehicles has made things a little different.

These vehicles do not have internal combustion engines under the hood. The electric motors spin in a circular motion to generate power that turns into motion on the wheels.

The electric motors make Tesla cars power efficient at higher revolution. The acceleration is felt immediately like a bike with a single gear. The drivetrain in electric vehicles makes them 3-5 times faster than their traditional counterparts.

What Is the Role of a Transmission?

Transmissions are crucial components in any vehicle since they help keep engines in better working condition. A car without a transmission is vulnerable to being unreliable since starting or stopping would be a nightmare.

A transmission helps change the gear depending on the speed and acceleration to reduce the engine revolution per minute. Besides that, the component helps the vehicle harness energy when necessary.

The system also helps traditional vehicles with an internal combustion engine to decrease fuel consumption and prevent the engine from overloading by maintaining its structural stability.

An electric car has a single-speed transmission that helps translate motor spins into a usable motion on the wheels. The transmission system allows the electric vehicle to safely accelerate without stalling.

Both automatic and manual transmissions perform similar tasks though they work differently. But modern vehicles have automatic transmission to enhance automatic gear shift and safe driving.

Do Teslas Have Transmissions?

Teslas have a single-speed transmission ideal for converting the electric motor spins into a usable motion on the wheels. The electric motor revolutions provide adequate power that propels the vehicle.

Most Teslas drive 3-5 times faster than conventional vehicles due to their power generation efficiency. The power generation makes Teslas not require more than one gear to facilitate their movement.

The Tesla acceleration is felt instantly due to a single-speed gear. If you are looking for a higher speed and acceleration, increase the revolution numbers.

The power efficiency and torque will be felt across the board. The Tesla owners no longer worry about the vehicle stalling while driving. The only issue still rocking their minds is range anxiety. But the discovery of portable supercharge seems to have brought the problem to an end.

Do Teslas Have Transmission Fluid?

Tesla cars do not have transmission fluid since they lack an internal engine combustion system. These vehicles rely on certain gases to lubricate and cool some parts when necessary.

But Tesla Model S is the only exemption since it uses transmission fluid. The fluid is only available at any Tesla service center or Tesla online shop. It helps to lubricate and cool the car’s internal components.

Conclusion on Do Teslas have Transmision

If you have read up this far, it is clear that you have been contemplating buying a Tesla car. These vehicles do not have a typical transmission system as seen in their regular internal combustion engine counterparts.

Understanding how electric vehicles work and operate will help you eliminate the notion of transmission in Teslas.

A Tesla car has a single-speed automatic transmission that transforms the motor spins into motion on the wheels.

The single-speed transmission operates like a bike since the acceleration is felt instantly after motor revolutions per minute increase. Teslas do not require transmission fluid or change since it relies on specific gases to lubricate and cool moving parts.