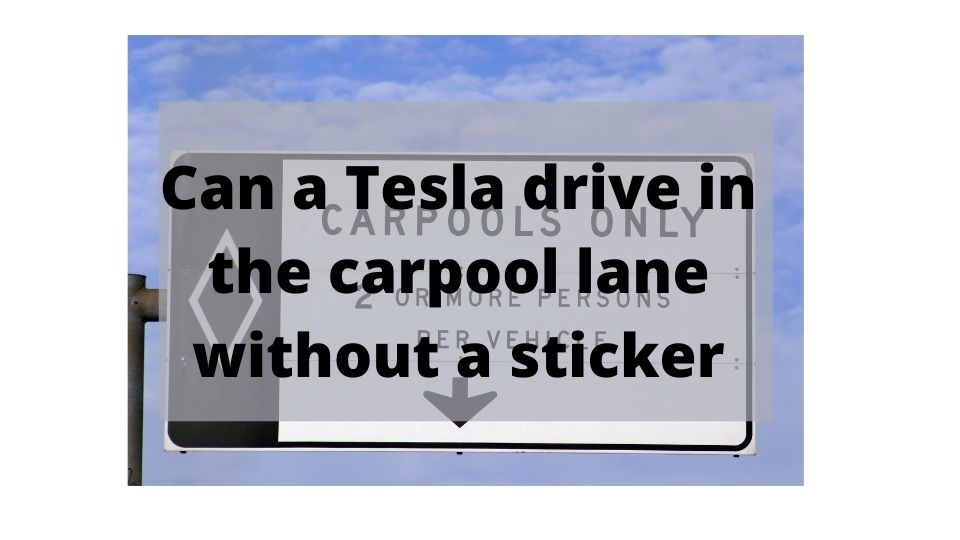 The carpool lane is certainly a blessing as it contains less traffic due to fewer carpooling vehicles. All you need is a Clean Air Vehicle (CAV) sticker and a certain number of people with you on board. However, people always ask about the legality of driving on it without the sticker. And even more importantly, can a Tesla drive in the carpool lane without a sticker?

The answer to this question is yes and no. Yes, you, like many others can drive in the carpool lane without a sticker. However, you’re not supposed to do this during carpool hours. If you do so, you may be pulled over and fined heavily for your troubles.

The following gives you some more info about this topic:

What is a carpool lane?

Simply put a carpool lane is for rewarding carpoolers by protecting them from the congestion in traffic. It allows carpoolers to simply travel in the empty lane, away from the stop-and-go traffic on the regular lanes. The carpool lane is nearly empty and this is why you save a lot of time.

It is hence great to have a separate lane for carpoolers then. In order to drive on one though, you need to be eligible for it. There are some requirements that are to be fulfilled in order to take advantage of the carpool lane’s lack of vehicles.

How to drive your Tesla in the carpool lane?

So, let’s say that you want to drive in the lane, what do you do to become recognized as a carpooler? Well, it should be noted that you must own a Clean Air Vehicle, or a CAV. This is a name given to any type of car by the government, which is able to pass the TZEV (Transitional Zero Emission Vehicle).

Then you’ll check for the Tesla model’s eligibility as a TZEV by observing its various details. If it matches the details given on your state’s website, then it is eligible. You will be able to determine the sticker that is applicable to the vehicle. Then you’ll have to apply for the sticker.

Once you fill out all the paperwork and receive your sticker, and stick it on your vehicle; you will be able to drive on the carpool lane. You should know that the entire process will be done in under a month. Also, you’ll receive instructions on how and where to put the sticker on the car’s exterior.

What if you don’t want to put on the CAV stickers on?

Many people consider the CAV sticker to be ugly and that it ruins the look the look of their car. Others complain that it can ruin the car’s paint job by being etched onto the paint. The solution for this is for you to put on some PPF and then place the sticker on it. Some wrap their vehicles; then add the sticker.

It should be noted that you can drive on the lane without the sticker during the non-carpool hours. The carpool hours are 5 to 9 AM and 3 to 7 PM, which are the time slots during the rush hours. If you want to drive without the CAV decal, know that these two time intervals won’t allow it.

If you drive a non-stickered car on the carpool lane during hours, it all depends on whether there are police watching. You’ve probably seen many ICE cars driving on the lane but if they get caught, they could be fined up to $491. If the police cannot catch you, you may still be troubled at the tolling booth.

For those who have a problem with this, it should be noted that these stickers will expire in 2025 (at least in California). This is regardless of whether you’ve issued them.