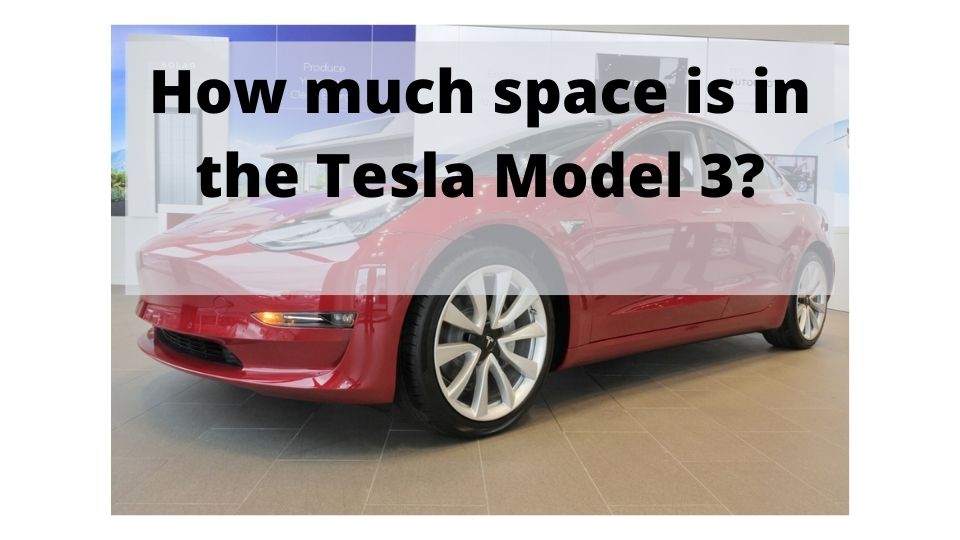 The Model 3 is the entry point to the amazing world of Tesla. But it is not just a budget Tesla as it offers you almost all of the high performance and luxury that its older siblings do.

The Model 3 is also the smallest Tesla in the catalog as it falls into the compact saloon category. But how small is it exactly? How much space is in the Tesla Model 3?

In short, Tesla model 3 cargo space measures 15 cubic feet, which is one of the highest for the class the Tesla Model 3 is a spacious car in all aspects. This is a car that excels in literally everything from its legroom and headroom to its cargo area. There is plenty of space for 5 people to sit comfortably.

The following article tells you more about the space in the Tesla Model 3:

How much room does a Tesla Model 3 have?

Let’s talk about the cabin first; the Tesla Model 3 is considered to be spacious despite its compact nature on the outside.

The front seats on this car are very comfortable and they’ll feel supportive even if you drive continuously for a couple of hours.

Of course, you also get a ton of standard features like heated seats but that’s beside the point. The front of the car is the place to be on a long drive.

Meanwhile, the rear seats do get cramped according to most testers. While they’re sufficient for most people who are of average height, tall people may have a problem. It is a shame because the legroom and headroom are adequate for the average joe.

How much cargo space is in a Tesla Model 3?

If you asked Tesla this question, they’d say yes. That’s right, the Tesla Model 3 may be the most cargo-friendly vehicle in the compact EV category.

Ignoring the cubbies, you get two spaces for storing your suitcases and other luggage. The first one is the regular trunk at the back of the car, which comprises the majority of storage space.

The second one is the trunk upfront, aka the frunk, which is also useful for smaller stuff. These two combine to make the total storage capacity of 15 cubic feet.

How much legroom does a Tesla Model 3 have?

It is a lot of room apparently. The Model 3 offers about 42.7 inches of legroom upfront, which is great. It offers 35.2 inches in the back which may not sit right with many.

How much can you fit in a Model 3?

A lot apparently. The testers at Car and Driver said that the Model 3 can store up to 15 carry-on suitcases. The seats in the back reportedly fold down in a 60/40 configuration if you need to amplify the space. The rest of the car is filled with storage bins and cubbies.

This bad boy is built on the same platform as the Model 3, but it is slightly bigger. Slightly means that it is two inches longer in length and wider than the Model 3.

These dimensions, plus the seating arrangement mean that the Model Y has more storage space. It offers you 68 cubic feet, a whopping 53 more than the Model 3. It also offers you more legroom and headroom.

Is the Model 3 small?

Yes, the Model 3 is small and it is quite maneuverable. But as far as the interior is concerned, it is quite spacious for its class and its size. You also get a lot of storage space in it. The only criticism that it gets is for the spaciousness of its rear seats.

Is Model 3 big enough for a family?

Yes, a Model 3 will comfortably accommodate your family for hours without any strain. While the rear may be cramped for tall adults, it is more than enough for kids to chillax.

the seats in the back do fold down. They follow a 60/40 arrangement of folding in case you need to expand the storage space of your rear trunk and can easily accommodate a child’s stroller along with some other stuff.