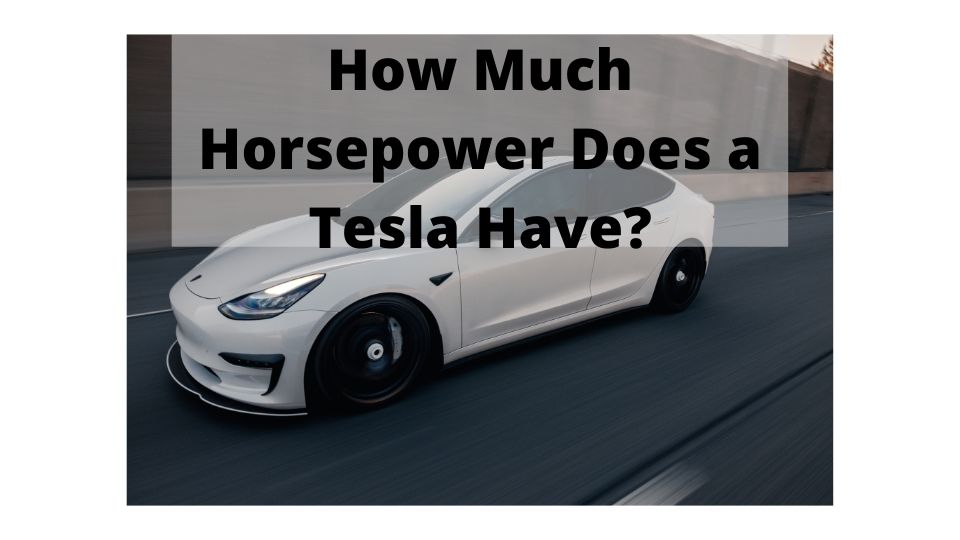 Tesla cars are popular because they’re engineering masterpieces. These cars offer it all to the consumer from build quality and efficiency to luxury and high performance.

Emphasis on that last part because Tesla cars are unlike anything we’ve ever seen before. A Tesla sedan or CUV is able to defeat most iconic sports cars and supercars in a drag race. So, this raises the question, how much HP does a Tesla have?

In short, Tesla cars come with more than one electric motor. The combined power output of these motors is added to the overall HP figure. The most powerful Teslas are the Tesla Models S and X Plaid with almost 1020 horsepower. Meanwhile the least powerful of the Teslas is the standard range Model Y at 275 horsepower

Horsepower Figures for Each Tesla Model

How Much Horsepower Does a Tesla Model Y Have?

I will begin with the Model Y, the compact CUV of the Tesla lineup. This is also the newest model that has been added to the Tesla catalog as it’s just 2 years old. Remove its exterior and you’ll see that the Model Y is quite similar to the Model 3. The Standard Range has around 275 hp and 258 lb-ft.

If you want the most out of the Model Y in terms of range and oomph, then you can get the AWD Performance version. Equipped with two motors instead of one like the aforementioned mentioned model, this produces up to 470 hp and 471 lb-ft of torque.

So, what exactly do these numbers translate to? Well, the basic Model Y will give you an acceleration time of almost 5 seconds from 0 to 62 mph. However, if you get the Performance variant then you’ll get a time of around 3.5 seconds.

How Much Horsepower Does a Tesla Model 3 Have?

Next up we have the Model 3, or the baby Tesla. While this car is just five years old, it spent three of those years as the EV best seller.

The Tesla Model 3 horsepower starts from 283 horsepower in the Standard Range car. It has a single motor in the rear that provides this, along with 302 lb-ft of torque.

Meanwhile, the dual-motor AWD Performance Model 3 stands at 480 hp. This is the combined output of its two motors; 197 and 283 horses produced by the front and rear motors respectively. This Model 3 produces torque figures of around 639 lb-ft.

The result of all these is that even the most basic Model 3 is able to accelerate from 0 to 62 mph in 5 seconds. The dual-motor AWD Performance versions can achieve the same milestone in a whopping 3 seconds, which is a supercar number.

How Much Horsepower Does a Tesla Model X Have?

The Model X is another best-seller on the list of EVs. It is one of the plushest mid-sized CUVs on the planet but it also packs quite a punch.

Unlike the other models mentioned on this list, this car is only available in all-wheel-drive versions. Its two motors give a combined power output of around 670 hp and 713 lb-ft torque.

If that’s not enough then the Plaid version will provide you with a combined power output of 1020 horsepower. this is because it has an extra motor in the rear, hence it’s got 3 of them.

The Model X is not as quick as you’d think at around 8-10 seconds to 62 mph from a standstill. The Plaid model on the other hand is a monster that can do the same in just 2.5 seconds. It is hence the quickest Crossover Utility Vehicle in the world today.

How Much Horsepower Does a Tesla Model S Have?

Finally, we have the Tesla Model S, which is the cream of the crop. This is the highlighted pride of the Tesla brochure and has been for about a decade now.

The Model S is a liftback sedan and it is one of the fastest ones today. Even after all of this time, it still remains unbeaten as the company’s flagship car.

While the regular long-range version is quite powerful, the Tesla Plaid is the real deal. It has a similar 3-motor layout as the aforementioned Model Y does. As a result, it also produces 1020 horsepower and more than 830 lb-ft of torque. It has a 0-62 mph time of around 2 seconds.

Since this car has been around for so long, there are many versions of it that one can find. If you search online, you can therefore find a plethora of different specs for it. The specs above are for the current version of the vehicle though; this is the one that received a refresh just last year.

How Much Horsepower Does a Tesla Roadster Have?

What if you want a car from before the Tesla glory days? Well, the Tesla Roadster was a fine vehicle for its time and it did well. This car had a single motor that produced about 288 hp and up to 295 lb-ft torque.

These modest figures gave it an acceleration time of around 3.7 seconds. It is important to know that here’s a new Tesla Roadster coming to us next year. If all goes well, it should boast the highest specs out of all the Teslas mentioned in this piece